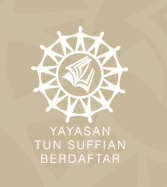 The Tun Suffian Cambridge Scholarship
Since its establishment on 11 June 2002 the Tun Suffian Foundation, under the Joint Royal Patronage of Their Royal Highnesses the Sultan and the Raja Permaisuri of Perak, has, among other things, provided financial assistance to young Malaysians pursuing law studies and young lawyers attending educational seminars and conferences both here and abroad.

The Tun Suffian Cambridge Scholarship (modelled on the Rhodes Scholarships, the oldest international fellowships initiated after the death of Cecil Rhodes in 1902 to bring outstanding students to the University of Oxford) has received official recognition from the authorities at Cambridge. In March 2008, Low Weng Tchung, a Perak-born Malaysian student became the first Tun Suffian Scholar at Cambridge where he obtained a first class in the LLM degree.

In December 2009, Azlin binti Sabtu, a Senior Federal Counsel at the Malaysian Attorney-General’s Chambers became the second Tun Suffia Cambridge Scholar. She has successfully pursued the LLM degree with honours at Cambridge.

In line with its principal objective to perpetuate the good name of the late Tun, the Foundation had commissioned a distinguished author, Professor Salleh Buang, to write a book, reflective of the life and philosophy of the great mentor entitled “In Service Of The Law-Simplicity & Greatness-Tun Suffian’s Legacy.” The book has been a sell-out and is currently out of print.

The Board awarded a financial grant to Universiti Teknologi Malaysia (UTM) to facilitate a research group headed by Assoc Prof Dr Ismail Bin Omar to review the National Land Code 1965, the torrens-system upon which it is based has lasted over a century and is in dire need of being updated and amended.

It has also agreed to sponsor a group from the University of Malaya Law Faculty to publish a book containing Tun Suffian’s judgments on Public Law with commentaries.

In addition to the Tun Suffian Cambridge Scholarship, the Foundation, subject to availability of qualified applicants, is also offering the following awards:
Except for those pursuing the PhD in selected Malaysian universities, these awards are open only to Malaysian citizens.

Terms and conditions for the application of scholarships
[As approved by the Tun Suffian Foundation Board of Trustees on 7th of August, 2014]

All applications for scholarships shall, subject to the qualifications hereinafter stated, be submitted to the Honorary Secretary at the following address:

THE TUN SUFFIAN LLB SCHOLARSHIPS (from Year 2 onwards)
An LLB scholar must maintain a CGPA of above 2.7 in all his/her semester examinations, failing which the Board of Trustees of the Foundation reserves the right to have the scholar’s scholarship suspended or withdrawn.

THE TUN SUFFIAN CAMBRIDGE LLM SCHOLARSHIPS (Maximum 1 Year)
An Applicant must:
THE TUN SUFFIAN PhD SCHOLARSHIPS (Maximum 3 years)
All PhD scholars are required to:
(a) Take no longer than 3 years to complete their PhD course;
(b) Ensure that their assigned supervisors submit once every three months a detailed report on the progress of their dissertation;
(c) Agree that the Board of Trustees of the Tun Suffian Foundation reserves the right to have any scholar’s scholarship suspended or withdrawn should a negative report from a scholar’s assigned supervisor is received, it being understood that it shall be within the absolute discretion of the Board to decide whether a report is negative or otherwise.

THE TUN SUFFIAN POST-MEDICAL/HEALTH BURSARIES
The applicant must provide evidence that the post medical course he/she intends to pursue whether in Malaysia or abroad is one which is recognised by the appropriate medical authorities in Malaysia.

Conditions Applicable to All Scholarships
How to Apply The Tun Suffian Scholarship?
Download application form.